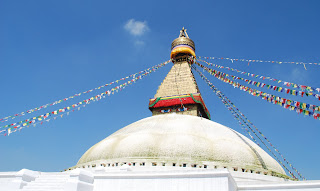 As I mentioned in an earlier post this week, Sunday the 14th February 2010 that traditionally marks St. Valentine’s day, this year will mark Losar; the Tibetan New Year. It will be the year 2137; the year of the Tiger of Iron. It is believed to be a time for renewal, for hope and for change; especially for Tibet and Tibetan people.

Losar is a celebratory tradition that pre-dates Buddhism to the Bon period, which is one of the earliest faiths in Tibet. In fact, it was Tibet’s first emperor, Songtsen-gampo (Srong-btsan sgam-po, r. 617 – 649 C.E.), who introduced Buddhism into Tibet.

Although two very distinct religions, Bon and Buddhism shared much in common. However, Bon was not really an organised religion. Many of its practices had closer ties with popular Tibetan traditions and culture. Buddhism, however, was very much organised and patroned by the Emperor and many of his allies in Nepal and Bhutan.

The Losar celebrations use to last up to 15 days. During Bon times, people would burn large amounts of incense to ward off evil spirits. Since they were unfamiliar with the lunar cycles that were introduced by an old lady called Belma and now determine the Tibetan calendar, celebrations usually coincided with harvesting and planting time. In fact, Losar was originally considered a farmer’s festival.

Nowadays, Losar celebrations last about 3 days. In the monasteries, religious practices start on the 29th day of the 12th month; equivalent to the Tibetan New Year’s Eve. Offerings are made for the long life of His Holiness the Dalai Lama. Pujas, meditations, prayers and chants are carried out for global peace, and love among all beings.

On this day, the 14th February 2010, Tibetans everywhere will be “Honouring” their culture, their religion and their history; proud of who they are and where they come from; hoping to one day return to their mother land, and in some cases to be reunited with what remains of their friends and loved ones.

1.2 million Tibetans dead and more die every day. If you can’t imagine that figure, think of it as wiping out the whole population of Dallas or Harare or Salt Lake City or Karaj or even Florida. Can you imagine that? That’s what it’s equivalent to.

For 51 years, Tibetan people have been forced to live in exile or under the Chinese regime. This same regime now is trying to bribe Tibetans to celebrate Losar against their will; offering them free gifts and offering to pay for their celebrations in Tibet.

What sum of money can bring back peaceful sleep to those who awake at night haunted by the horrific events that took place in Tibet?

Why pay any money at all? It’s obvious this is just another attempt at putting on a show for global vision. It’s another distorted propaganda stunt to try and raise the Chinese Government’s image in affairs of public relations.

It’s completely contradictory to recent events as well. In fact, just recently, the Ministry of Education removed the University of Calgary (USA) from their list of accredited institutions. Why? Because the University bestowed his Holiness the Dalai Lama with an Honorary Degree.

Let me just say here that when I talk about the Chinese Government, I am not talking about the Chinese people. I have many beautiful Chinese friends. I lived and worked in China. I had first hand experience of Chinese politics (in reality - on a day to day living basis) and how it affects the Chinese people themselves, and it’s not much better for the people in less fortunate positions.

For 51 years now, Tibetan people have shown they can bend like a cane in the wind but they cannot be broken. Tibet, the land, may not be free from Chinese rule but Tibetans have shown that their hearts and their spirit are very much strong and free.

If the Chinese Government really want to do something for Tibet and Tibetans, for Losar, then they could start by releasing some of the imprisoned. Then, they could go back to the negotiating table and identify (among themselves) how they could return Tibet to its people without losing face. These two simple gestures would be worth more than they could ever offer in monetary compensation to pay for any celebration.

Here in Madeira, our small but zealous Buddhist community will Honour Tibetans everywhere by commemorating Losar, on Sunday, at our modest meditation centre.

To all my Tibetans friends at Kopan Monastery, (who welcomed me into their home and made it my home), Kopan Nunnery, (my beautiful ladies who touched the very heart of me), Hengja Tibetan Refugee Camp, (who gave me a piece of their heart and accepted a piece of mine), Pokhara, Lakeside, Kathmandu, (I couldn’t have wished to meet nicer people), India & Tibet (I’ll get there one day - I promise) and Lisbon (Um dia vou regressar!) - although I can't be there in person, I am there in spirit. - Tashi Delek Losar -